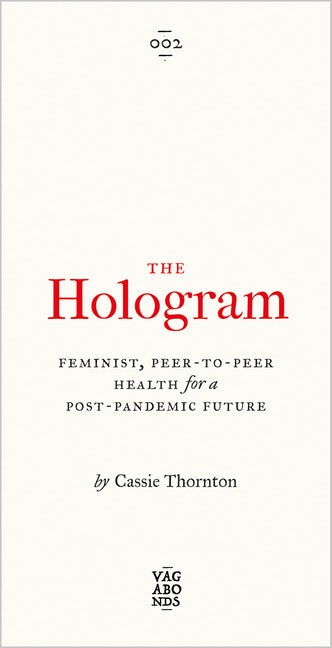 The Hologram: Feminist, Peer-to-Peer Health for a Post-Pandemic Future

The Hologram: Feminist, Peer-to-Peer Health for a Post-Pandemic Future

In an era when capitalism leaves so many to suffer and to die, with neoliberal 'self-care' offering little more than a bandaid, how can we take health and care back into our hands? In The Hologram, Cassie Thornton puts forward a bold vision for revolutionary care: a viral, peer-to-peer feminist health network. The premise is simple: three people - a 'triangle' - meet on a regular basis, digitally or in person, to focus on the physical, mental and social health of a fourth - the 'hologram'. The hologram, in turn, teaches their caregivers how to give and also receive care; each member of their triangle becomes a hologram for another, different triangle, and so the system expands. Drawing on radical models developed in the Greek solidarity clinics during a decade of crisis, and directly engaging with discussions around mutual aid and the coronavirus pandemic, The Hologram develops the skills and relationships we desperately need for the anti-capitalist struggles of the present, and the post-capitalist society of the future. One part art, one part activism, one part science fiction, this book offers the reader a guide to establishing a Hologram network as well as reflections on this cooperative work in progress.

Publisher From Later
Author  From Later in collaboration with At the Moment. Design by Strike Design Studio

Memory Work is speculative scenario-fiction, imagining futures of women's work and economic transformation through the prisms of class, gender, immigration, status, and race. Expressed as an immersive soundscape and web experience, Memory Work invites audiences to visualize — in the mind’s eye — a possible future of women’s work in Toronto 2038. A blend of guided meditation, radio documentary, and cinematic soundscape, Memory Work was part of the exhibition This Women’s Work at Myseum Intersections 2020. The project is a collaboration between women’s collective At the Moment and foresight studio From Later, with contributions from Toronto women. Using strategic foresight methods, From Later developed this research-based future scenario to imagine new ways of defining, acknowledging, and valuing the wide spectrum of women’s work. Memory Work engages with ethical and moral questions around care and labour across time (past, present, and future) to question what a feminine economy could be. It hopes to empower listeners to use it as material for meditation, and stimuli for imagining collective future memory together. Listeners are encouraged to use Memory Work as a resource, to question it and iterate on it, generating their own future experiences, visions, vignettes, and artifacts.

Publisher Printed by Paper Machine. Self-published by The Independent Press during Antenna's residency at Paper Machine
Author  is (Ingrid Sibley)

This book was made in residency at Paper Machine. It was begun two years prior, but seemed the right fit for the time we were in, as the subject matter is "life scripting" or how to write your way into a desired future. It was made with an accompanying workbook for Black people, to investigate how to dream and script our deepest desires. Turning to the power to create the future gave me refuge during the strange time I was in residency, June 2020, and helped me to feel empowered personally, and able to share a unique perspective with other potential dreamers.